When building the attached qtbug71551-qbs.zip 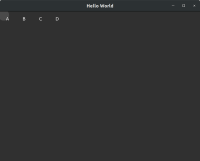 In the screenshot above, there should be a drop shadow under the tool bar, but it's missing.

, which are files that Qbs generates that both show Qt Graphical Effects.