I am creating a window with several buttons with a layout in rows and columns, some buttons spawning multiple columns. A simple version of this problem using 2 buttons in the top row, and one in the bottom row is attached as a minimal example.

This creates 3 windows where I try different layouts and options. On Linux, all three variations create an identical layout (as it should): 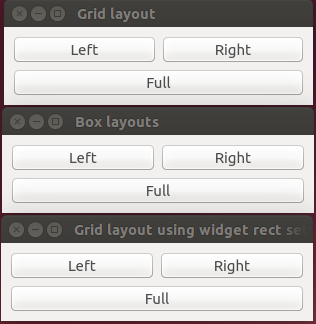 On OSX with Qt 5.9.2 though, only the GridLayout creates the correct layout: 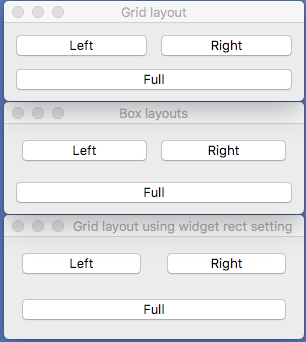 When using the BoxLayout-version the "Left" and "Right" buttons have too much space around them and are not vertically aligned with the "Full" button.

Others have suggested to use the Qt::WA_LayoutUsesWidgetRect settings, but this only makes things worse. While it fixes the alignment problem, there is even more space around all buttons.

Some will probably say, why not just using the first version with the GridLayout? The problem is that it is not always possible to put everything into a GridLayout, and it makes the software design unnecessary difficult.