Qt Gui can not depend on OpenGL in Qt 6 anymore. Move all the OpenGL related classes into the Qt OpenGL module. (or somewhere else if that's removed/deprecated)

To be done in line with QRhi's needs: this must not include things like QOpenGLContext, QOpenGL(Extra)Functions, and QOpenGLProgramBinaryCache, and all OpenGL-related QPA plumbing. Those are also dependencies for the RHI's OpenGL backend.

This is currently being done in smaller chunks:

QOpenGLTextureBlitter - Was used by QPlatformBackingStore, and moved in this one

QOpenGLWidget has been moved to a new QtOpenGLWidgets module (similarly to QtQuickWidgets).

QOpenGLVertexArrayObject - Can be moved after texture blitter

QOpenGLBuffer - Can be moved after texture blitter

This leaves us with:

I modeled the dependencies as I came across them: 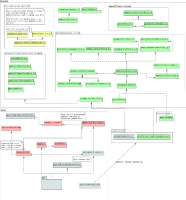 The image is showing work of patches that I considered done (yellow boxes haven't passed reviews/CI yet).

Make the opengl module optionally depend on widgets
Gerrit Review:

Move QOpenGLVersionProfile to its own files
Gerrit Review:

Move QOpenGLWidget from QtOpenGL to its own module
Gerrit Review:

Doc: Move example file that was left behind
Gerrit Review: