A build system can under some instances add duplicate include paths with different non-canonical variations. For example instead of adding /foo once, it adds /foo/bar1/.. /foo/bar2/.. /foo/bar3/.., etc.
The CMake-based build system for Qt Creator did that for the libs/ and plugins/ paths. See

In that case, the code model has the same list of duplicated paths and the code completion shows multiple (seemingly identical) paths when completing an #include. 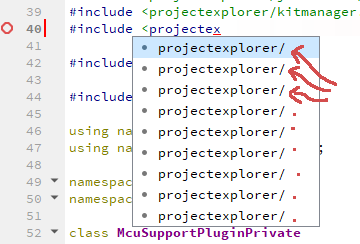 To reproduce this, it is best to revert the fix for